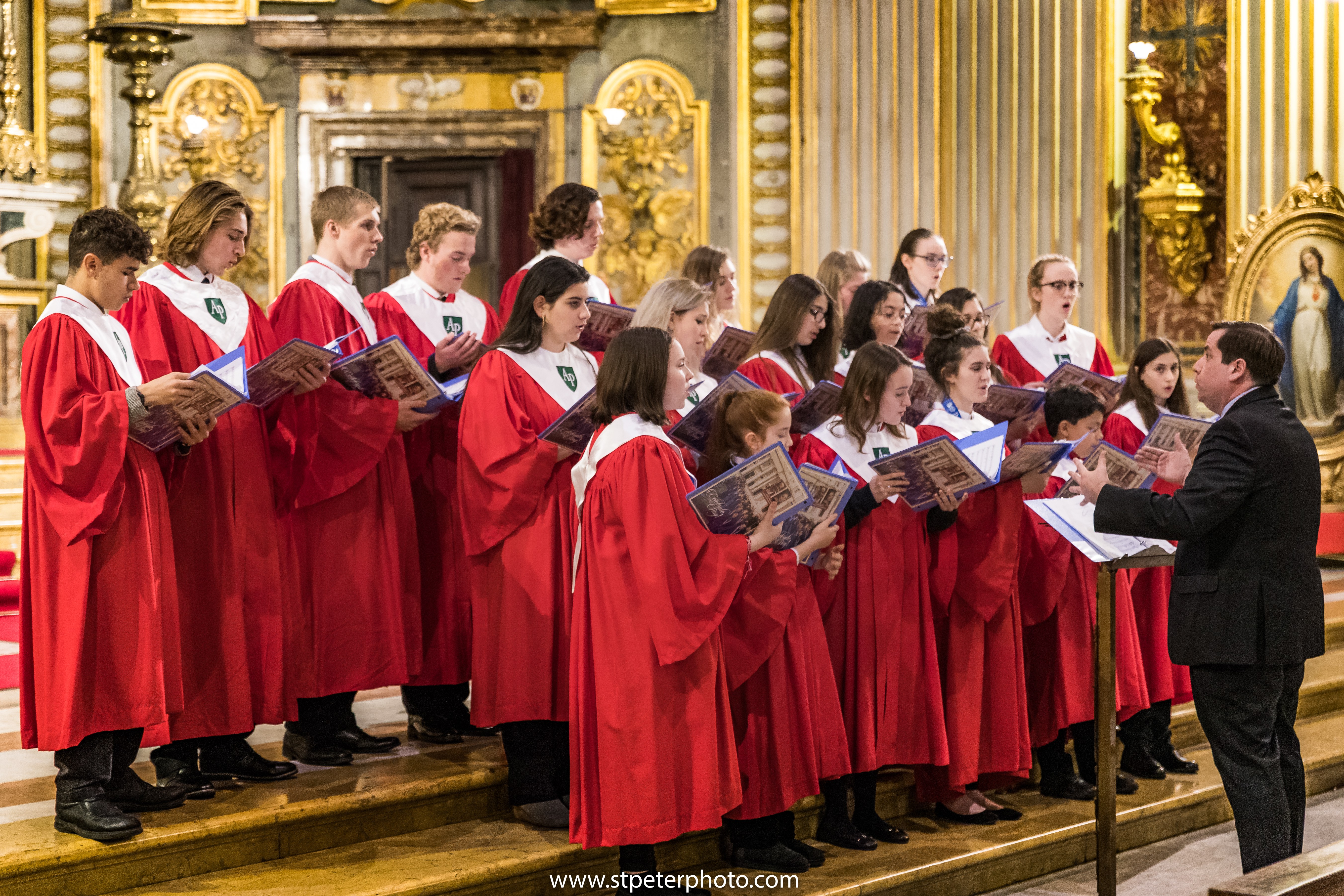 The Austin Prep Choir recently returned from a week-long trip to Rome, where students had the opportunity to sing at Saint Peter's Basilica and for Pope Francis during the New Year's Eve celebration on Saint Peter's Square.  The Austin Prep contingent consisted of a group of 60 students, faculty, and families who journeyed to the Eternal City for The 6th Youth and Adult Choir Festival.

During their trip, which took place December 27 to January 3, Austin Prep students attended the Solemnity of the Blessed Virgin Mary celebrated by Pope Francis and the Sunday Angelus. The Choir provided music for the Solemnity of the Holy Family at the Altar of the Chair of Peter and for the January 2 Mass at the Basilica of Saint Francis in Assisi. The Choir also performed a concert at the Basilica of Saint Ignatius of Loyola for the people of Rome on New Year's Day.

The highlight of the trip took place on New Year's Eve. After his annual December 31 liturgy, Pope Francis exited Saint Peter's Basilica in the Vatican and walked into the piazza, where he was greeted by dignitaries and others in attendance. The Austin Prep Choir sang traditional Christmas hymns, which drew the Pope's attention. He began to make his way to the Choir to listen to their song, touching the hands of Choir members and gesturing his welcome and prayers with his warm expression of Christmas joy to both Austin Prep students and their families.

The Rome trip was an extension of the liturgical experience and art and design curriculum at Austin Prep. As with all of the school's academic programs, opportunities for students to showcase skills learned in an authentic way help create unforgettable experiences that neither textbooks nor classroom lessons can impart.

Dr. Hans-Albert Courtial, Founder and President of the Foundation for Sacred Music and Art, was integral to Austin Prep's winter Choir pilgrimage. "I strongly believe in the importance of new generation of artists and composers," he shared.

"This is the reason why the aim of this Festival is to gather choirs of young and adult voices together to encourage musical excellence and to promote the unifying power of music, which improves contacts among cultures, traditions, and people."

As the Austin Prep students returned to campus from their Rome travels, they begin 2020 both inspired and enriched by their experience.

"It was an amazing experience to see the churches, sing for the Pope and to be able to travel with family and friends from school," Olivia Doherty '22 said. "But more importantly, it was humbling to be able to take such a trip, and we are grateful for the special opportunity we were given. We are able to start the new year centered and re-connected"